The Baneblade is the primary super-heavy tank used by the Imperial Guard and is one of the largest and oldest tanks used by the Imperium. These massive. I’m about to buy a baneblade not sure what variant I am going to make but that isn’t important. I don’t have a data sheet for it and don’t really. Hello guys it’s me again. I just bought a baneblade to add to my guard army and I am having trouble finding out which book has the most. 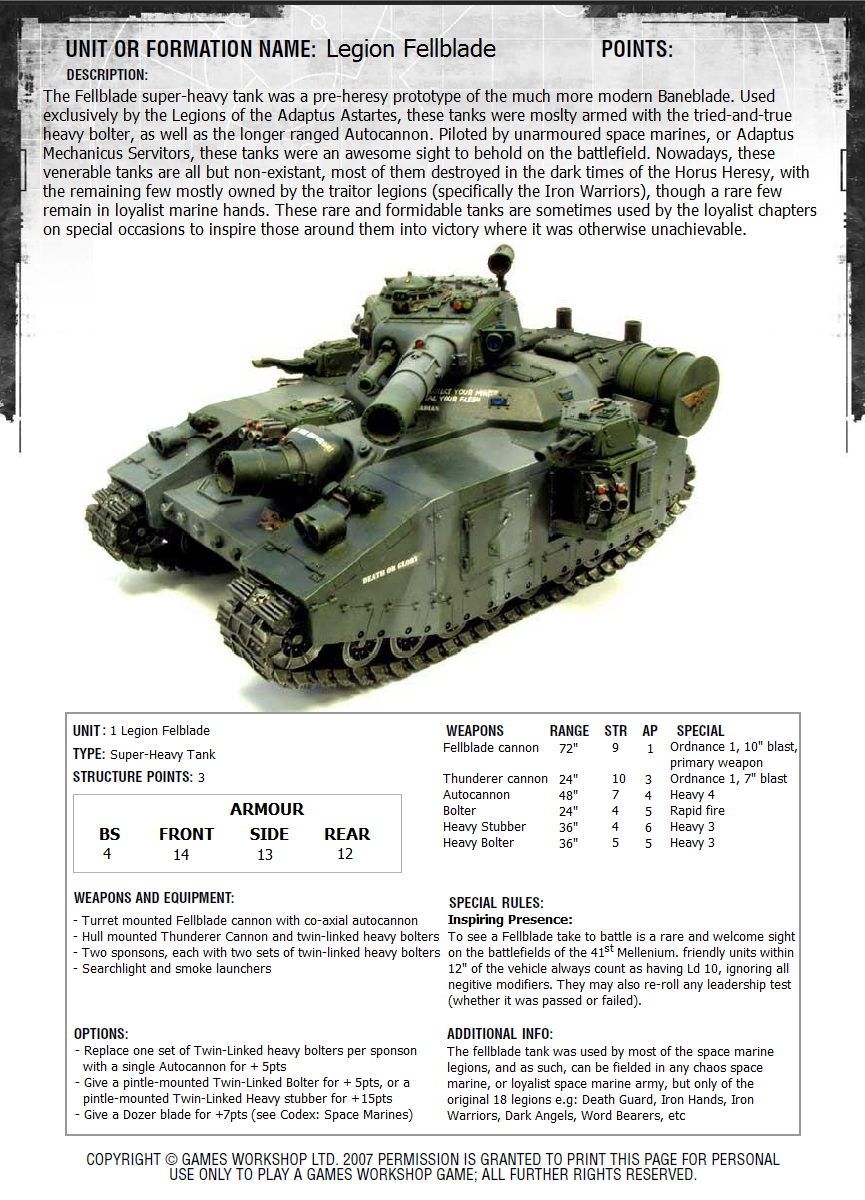 This message was edited 1 time. 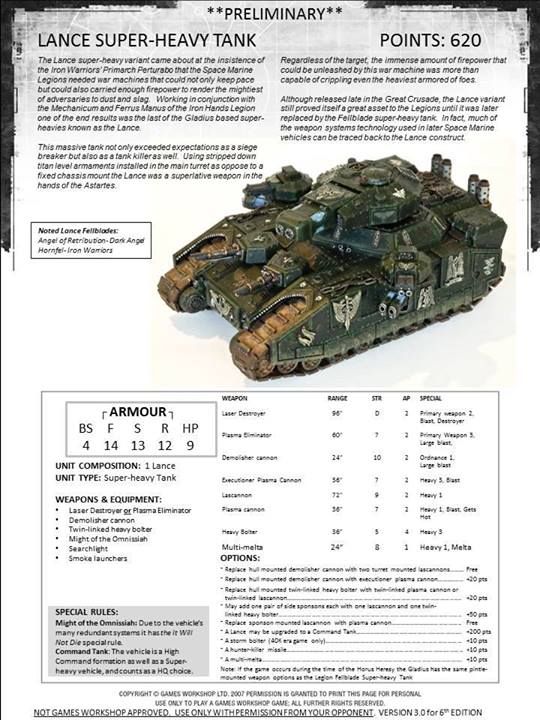 Forum adverts like this one are shown to any user who is not logged in. Join us by filling out a tiny 3 field form and you will get your own, free, dakka user account which gives a good range of benefits to you: No adverts like this in the forums anymore. Times and dates in your local timezone. Full tracking of what you have read so you can skip to your first unread post, easily datashete what has changed since you last logged in, and easily see what is new at a glance.

Email notifications for threads you want to watch closely.

Being a part of the oldest wargaming community on the net. If you are already a member then feel free to login now. What’s the best Baneblade Variant in 8th Edition? So I’ve been building a Genestealer Cult Army out of skaven models, and I’m about to open a Baneblade kit as the centerpiece for the army who knows if it will hit the table often, but a baneblade crewed by Skaven sounds like a blast.

My question is, what is going to be the ideal baneblade variant for 8th edition? Obviously all four sponsons are gonna put out a lot of damage, but I’m wondering about the primary gun specifically.

I’m torn, I suppose ultimately between whether you want more dice to shoot with, or more consistent damage. The Shadowsword is looking at absolutely wrecking other Lords of War, but maybe the Baneblade is just the better multi-purpose choice, since it’s rocking a demolisher cannon too.

What do you guys think?

The one that prevents units hit from advancing and charging seems like it will have alot of utility. The 8th edition meta seems to starting as infanttry centric dagasheet vehicles being mostly useless, and the melee armies seem to have alot of tricks for getting into combat baneblae 1 and 2.

So having something that can slow down the hordes will be really useful. Standard baneblade is also the most general purpose of the guns. Hell Hammer seems a bit like overkill, Datwsheet -4 will take care of anything that isn’t a MEQ in cover, and most things with more armor than that have invulnerable saves of some sort.

Still, it does kill MEQ really well, and is better versus tanks. Why Aye Ya Canny Dakkanaughts! Personally I still like the shadowsword, that thing is gonna pop tanks and big monsters easily. The moral of the story: Don’t park your Imperial Knight in a field of Gretchin carrying power tools. All the while, my opponent is furious, throwing his codex on the floor, trying to slash his wrists with safety scissors. Ignores Cover, Also Mounts a Demolisher Cannon Really like the HH-4 will wipe anything short of ultra elites like termies, ignore cover is always a bonus.

Roll two dice for attacks and discard lowest, Re-roll ones for damage Cant really see why you’d take this guy over the HH or Baneblade. Halves movement of an enemy hit Good amount of shots and decent dmg and halving movement could be very nice although perhaps situational.

Good all rounder plus the demo cannon added on. Overall for me outside of Titan fights, I’d go HH. The SS and SS suffer imo from “only” having d6 shots.

If you’re going to pay a premium for a SH tank, you need to maximise its shooting. Still as long as Hissy keeps showing up this is one of the most entertaining threads ever. I was wondering the same thing, and had two ideas: Shadowsword with bolter sponsons.

If you are going to see titanic units, then nothing is better. I don’t know if it is the most cost efficient choice but it is a titan killing cannon, what is not to love? It is a shame you can’t move it without losing BS. Save the CP to reroll the number of shots if it is a 1 or 2.

For something a bit more fun, take a Stormsword or a Hellhammer and give dattasheet flamer sponsons. Then proceed to ram it down the throat of the enemy. Sure, you are -1 to hit if you move but those weapons have either 2d6 or 2d6 pick highest shots.

Also, if you charge you get 9 str 9 attacks and can still shot in combat. I don’t know how well it would work, but it sounds really fun. As a bonus, if someone charges you then all your flamers get a free round of shooting!

The enemy can try to charge from outside 8 inches, but then they need to get an 8 on 2d6which could fail and simply give you some free shots with your other guns. Thanks for the input gents! As a Chaos Night Lords player, I have always hated imperial knights The thought of one shotting a IK not likely, but possible fills me with more glee than is probably healthy. Also, just so no one is confused ‘Titanic’ is a Keyword now. Wraithknights, Imperial Knights, Stompas etc are all considered Titanic.

You can probably count the normal Baneblade and Stormsword out due to low firepower, but try to figure out the rest of your army first and use the tank to make up for any weaknesses.

Cant really see why you’d take this guy over the HH or Baneblade. I’m looking at either of the top 2, moreso the Hellhammer. They do seem fairly samey though, it’s all about weight of fire vs AP and damage. The Hellhammer seems more consistent, getting more shots at a decent enough strength anyway. The 2d6 shots should more then make up for the less APas well as not having to roll for damage – it is a set 3.

I wouldn’t go for the Banehammer though, for the pure reason such a massive tank shouldn’t be softening up or weakening a unit, but should be totally annihilating it. A strength of 8 and only -2 AP seems pretty lackluster for a big tank too. If you can’t believe in yourself, believe in me! Believe in the Dakka who believes in you! I’ve got a hellhammer that I never got round to painting up. I think that could change! My imperial fists are quite looking forward to seeing what their Falchion does Anybody’s mind changing with the release of the guard codex.

Rule of cool means mine will be a stormlord, but which is the most competitive. Coz I sez it doz, dats why. If, for some reason, you don’t like the Shadowsword, Baneblade or Stormlord. Cadia may lie in ruin, but her proud people do not! For each brother and sister who gave their lives to Him as martyrs, we will reap a vengeance fiftyfold! Cadia may be no more, but will never be forgotten; our foes shall tremble in fear at the name, for their doom shall come from the barrels of Cadian guns, fired by Cadian hands!

Forward, for vengeance and retribution, in His name and the names of our fallen comrades! It depends on your target and what you are trying to achieve. I tend to run generalists. Points are also a consideration, with some of the cheaper tanks being good simply because they are cheap. Some people say they know no fear. What they mean is that they have encountered and conquered it.

I, on the other hand, truly know no fear. It is as alien to me as doubt, rage, or mercy. Do Renegades benefit from the points decrease and new rules? I have to say it’s Shadowsword.

You aren’t truly playing Imperium if you don’t have a giant death laser. Well I like the Banebldae, although if I had to pick the most effective it would be a Catachan Hellhammer with full flamer sponsons. Get one of those and ram into the thing you want dead with “Crush Them!

Then fall back and do it again. Expensive but it will do the job. What is the range of these weapons? For many is very long, but I suppose it should be taken into account for the discussion. Catachan Baneblade just got pretty stupid good.

Catachan lets you reroll one of the dice and you can command point another if you want.